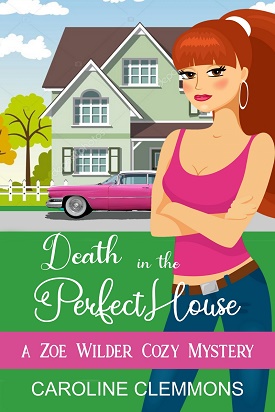 Welcome to a fellow author and colleague on her latest book:https://read.amazon.com/kp/card?preview=inline&linkCode=kpd&ref_=k4w_oembed_pMDziF8ZL4klkT&asin=B09RY7G2NW&tag=kpembed-20

After she realized Roy Rogers wasn’t waiting for her to grow up so she could marry him, Caroline Clemmons wanted to be like Nancy Drew. Later, she wanted to write stories like Nancy Drew books. She writes in a tiny office surrounded by research books and mementos. She and her Hero live in North Central Texas cowboy country where they ride herd indoors on their rescued pets.

The over seventy titles—mostly romances—she has created have made her a Top 100 Amazon author, a bestselling author, and won awards. She writes cozy mysteries as well as sweet to sensual romances about the West, both historical, contemporary, and time travel. In addition to her series, she has written single titles and contributed to multi-author series and box sets. When she’s not writing, she loves spending time with her family, reading her friends’ and other favorite authors’ books, dining in restaurants, browsing antique malls, delving into genealogy, checking Facebook, and taking the occasional nap. Find her on her blog, website, Facebook, Twitter, Goodreads, and Pinterest.

And here’s just an excerpt from this really well-written mystery:

Zoe Wilder is a reporter for the local newspaper, The Spencer’s Ridge Gazette, in Winston County, Texas. She also writes cozy mysteries. Perhaps that’s why she sees a crime where there may not be one. Members of the local Winston County Sheriff’s Department view her as a pretty, redheaded kook and don’t take her seriously. When she finds her friend Margo Kingsley dead, she is certain Margo was murdered and Margo’s housekeeper agrees. The investigating officer doesn’t believe her, and the death is ruled an accident due to a fall while inebriated.

Zoe is determined to find the killer. A new Chief Deputy, Caleb McBride, arrives a few days later, hired from Fort Worth PD’s homicide division under unusual circumstances. Deputy McBride (aka Deputy McBossy, McSnarky, McYummy and other names Zoe devises) is determined Zoe will leave detecting to him and his officers. He warns her she is making herself a target. He also warns her he’ll arrest her if she interferes again. Undeterred, Zoe fears he is only going through the motions to appease the late woman’s daughter. Surprisingly, the new Deputy is the nephew of the dead woman’s housekeeper, of whom Zoe is very protective.

DEATH IN THE PERFECT HOUSE is a light-hearted cozy mystery which contains humor and light romance, with no graphic sex, and no cliffhangers.

I turned at the sound of a vehicle. A sheriff’s office patrol car pulled into the drive at Margo’s, but I didn’t recognize the driver behind the wheel. Waiting on the Hamptons’ front porch, I watched the deputy climb out of his car and walk toward Margo’s, but then he stopped, changed direction, and veered toward the Hampton’s.

Pretending to look at my notepad, I observed him from beneath my lashes. I thought I’d met all the Winston County deputies. Nope. I’d have remembered if I’d ever talked to this guy.

Wow, would I ever.

He sauntered up the walk with a long-legged gait just short of a swagger. The man filled out his uniform as if he were the poster model for a recruiting campaign. He stepped onto the porch and I looked up. And up. My four-inch heels raised me to six

one, but he was two or three inches taller.

His lips twitched in a smile that displayed a dimple in each cheek. “Get an eyeful?”

I ignored his remark. “Who the heck are you?”

Mirrored sunglasses hid his eyes. “Ma’am, you must be confused. I wear the uniform, and it’s my job to ask questions.”

“Zoe Wilder. I work for The Spencer’s Ridge Gazette.”

He lowered his Raybans to peer at me, displaying deep blue eyes. “I guessed that’s who you were.” He looked me up and down, which wouldn’t have been bad if he’d displayed at least a little lustful appreciation. But no, it was as if he were inspecting a possible drug dealer in a line-up.

I ignored his rude perusal. “You’re wasting your time here. The Hamptons are on a cruise for another week with City Councilman Kirk Stevens and his wife.”

“You don’t mind if I find out for myself, do you?”

I stepped aside and gestured toward the door. “Be my guest.” But I was thinking, what did he mean, he’d guessed that’s who I was?

He rang the bell and the same maid answered. This time she appeared a little tense, no doubt when she saw his uniform. She repeated her story then shut the door again.

I smirked at him. “Satisfied?”

What kind of answer was that? “Heard what? That I’m an excellent feature writer? Or that I write mystery novels?”

I tapped my notebook against my leg then stopped when I realized it made me appear nervous. “Perhaps you’ve read my latest release, Sentimental Journey To Death? You see, I always use old standard songs for my titles, like that one and the previous, I’m In The Mood For Murder. Or, have you read my newspaper articles?” It was as if this handsome man—this very, very handsome man—had unleashed my

tongue and I was powerless to stop babbling.

Inside, I was thinking, God, why don’t you just strike me dead now and shut me up? But The Almighty didn’t do either, because He was too busy working toward world peace and eliminating hunger—or perhaps He was flat out laughing at me.

I took a deep breath and finished, “Is that what you heard?”

“Not exactly.” Sarcasm tinged Deputy McBride ’s voice. “It was something about a pretty, red-haired kook who works for The Spencer’s Ridge Gazette and thinks every event is a major crime in masquerade.”

“Kook? I am not a kook.” I comforted myself that at least he’d said I was pretty.

So swing over and check out our new friend’s book while waiting for our next special to start on the 23rd.–Remember, The Oberllyn’s Origins will be just 99 cents for one week-get your copy!

And thank you to all who downloaded our new mystery last week!

I finally got it done, as promised!

March 9, 2022, and it’s about time! I got BW and the Scent of Death published today, and though I won’t have the official launch for a week or so, wanted you to know about this first! Read on for our March almost spring specials: https://read.amazon.com/kp/card?preview=inline&linkCode=kpd&ref_=k4w_oembed_ccHYHoEMpAehML&asin=B09V71N9BH&tag=kpembed-20

This month we are featuring two of our latest books for you to download, enjoy, and hopefully, write a review about on Amazon; the first special is running for free on the 14th, 15th, and 16th only This is your chance to get our brand new Cozy mystery! A lot of you have been waiting to see what happens to BW, Ascot, and the rest of the gang at Sinclair’s Animal Rescue, and here is their continuing adventure. Remember-it’s an only for 3 days free download, and hope to hear from a bunch of you! Drop comments on our comment page on this website (Ask questions as well) and post reviews on Amazon/Goodreads-I love hearing from you and it really does help. You can get your copy at https://read.amazon.com/kp/card?preview=inline&linkCode=kpd&ref_=k4w_oembed_ccHYHoEMpAehML&asin=B09V71N9BH&tag=kpembed-20

Our second special runs from March 23 to the 30th-for one week only, this book will be 99 cents a copy-after which it jumps back up in price. I am just trying to save you a bit of money while finding more ARC readers; folks who will read a copy and leave a review in exchange for getting a free copy of each book that comes out. If you’d like to do that, send me an email, pm on FB, or comment here.

People ask me why I chose a model for the cover who looks disgruntled/furious.dangerously angry, in general, not happy. Of course, the girl on the cover is angry; kidnapped, sold as a slave, hauled across the deep waters to Scotland, married off to someone she barely knows, never to come home; how can she survive to found a dynasty? Based on actual facts, this prequel to The Oberllyn Family Series is a fast-paced historical novel that reveals the roots of the Oberllyn family. It’s a must-read to understand just why the family really doesn’t trust the government- and since history has a way of repeating itself, you might want to reconsider what happened to her. You can get your copy March 23-30 for only 99 cents at https://www.amazon.com/Oberllyn-Origins-Prequel-Generations-ebook/dp/B09PTLWQYX https://read.amazon.com/kp/card?preview=inline&linkCode=kpd&ref_=k4w_oembed_8YlJ49SAReckic&asin=B09PTLWQYX&tag=kpembed-20So have a good read this month as winter tries to turn into spring; whether we have snow, rain, sleet, sun, or whatever, reading is a great way to explore your world from the safety of your favorite chair! See you next month for specials and a new giveaway! And you can also send some comments here on our comment page…and don’t forget to consider becoming one of our ARC (advance readers).