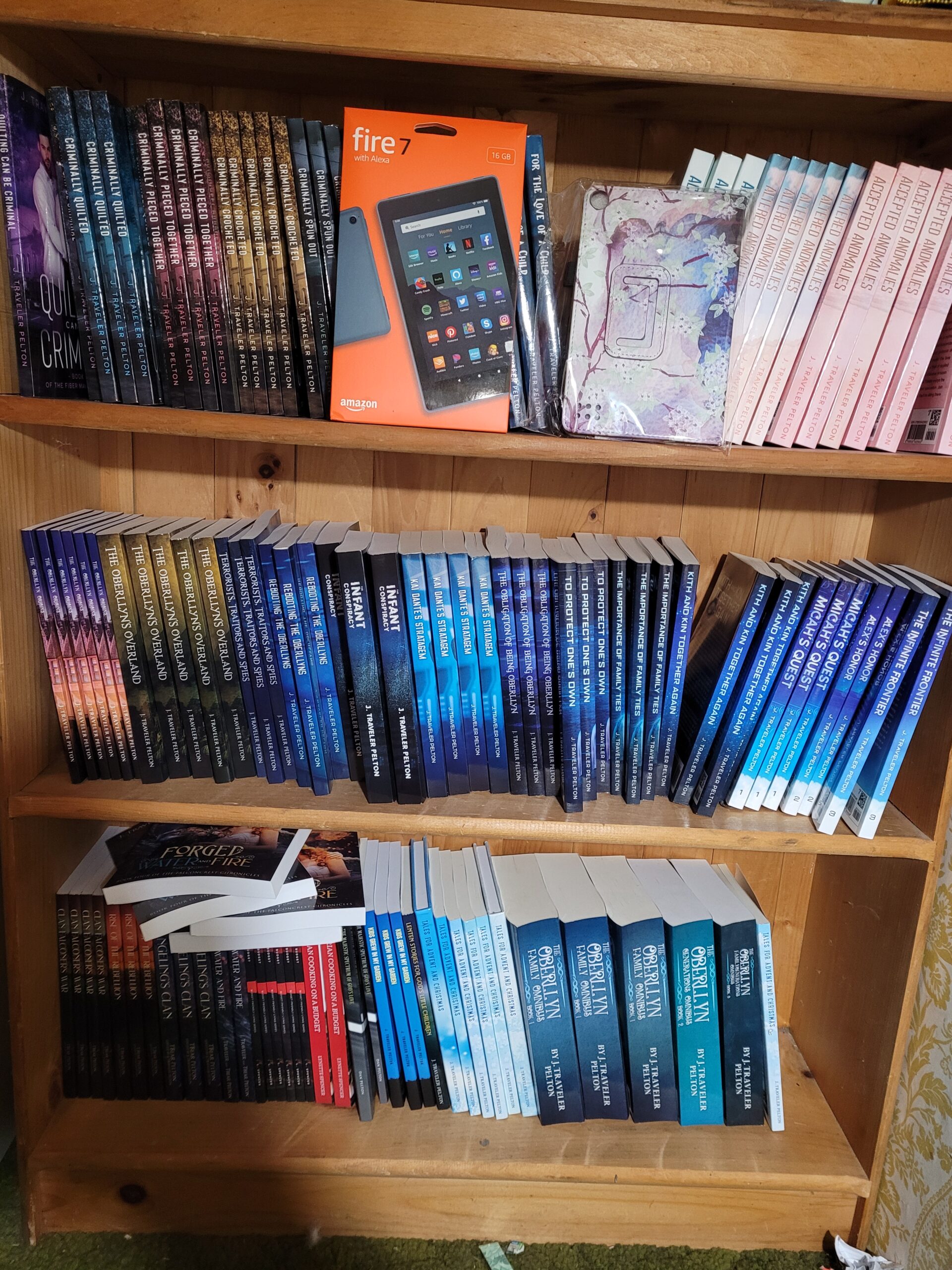 October 14, 2022; Good grief!  I think it’s about a month early this year; of course, doubt if it will stick, but honestly, Mother Nature is really getting the jump on us all!  I haven’t even got my summer and winter clothes switched in the closet. The leaves outside are turning beautifully but they aren’t going to last long.  The temperature has been getting colder and I’ve had to dig out sweaters and sweatshirts. I am already so done with pumpkin spice. Between falling leaves and falling politicians, I simply don’t know how well autumn is going to turn out. Maybe it’s best winter come early to get them all inside and out of the streets.

I heard a suspicious crash in the next room; the CBW has discovered wastebaskets.  Right after I got the floor swept; I might as well have a raccoon in the house nowadays and she isn’t even walking yet!  She will be shortly.  They grow so fast. If you have little ones, enjoy them while you can. This time last year, this angel was still in process. She’ll be one soon. I wish everyone had her sense of curiosity.

I hope you are reading the lessons I put under courses and that you’re learning and able to use the information I gathered for you from my own experiences. You can make so many less errors than I did! I’ve been gathering up more things to add to the course.  Drop me a comment and let me know if they are working to get you out of writer’s block and into a published book. I so hope so!

We do have the gardens all put away for bed and are just starting on leave pick-up to cover everything.  The power tools are all winterized, the animal barns are cleaned out, the new straw in place, and the farm is winding down.  That means I have more time for publishing things-and I have two more giveaways before Christmas -your chance to win! and a new book coming out in three weeks.  (I’ll stick a little of the first chapter down below for the book, and the 2 of 3 Fall giveaway contains spiritual, Christmas, and Historical books and a kindle 7 with a pretty cover) Then I go to the Indie convention in November and before you know it, we’re going to be prepping for thanksgiving!

Now as promised, a peek at Book 2 in the Melody’s Zoo series:

The Tri-towns, as the locals liked to call them, were three small villages in Holmes County, Ohio that were home to country-loving, hardworking, English and Amish people who mostly liked to be left alone. Each little town had its own secrets and each had its own quirks and eccentricities; in general, they cared for each other but with some exceptions.

The towns themselves were separated by miles of farmland, mostly Amish, except for the Pum family’s monster potato farms. Most farms were much smaller, family farms, some dairy, some haymakers, very diversified. A few concentrated on intensive, organic farming, supplying the Market in Columbus and other large towns with fresh, novel, and homegrown produce. There were several orchards, greenhouses, and grain growers. The FFA and the 4-H clubs were big, and the combined rivalries at the local county fair were both friendly and cutthroat.

There was talk of building a new goat barn at the fairgrounds; there had been talking for five years ever since the flooding of 2018 caused the goats and poultry to be evacuated up to the harness racing horse barns, upsetting their owners more than the horses. The races had been over for that year anyway; people had made their bets, won or lost, and a lot of good-natured competitive camaraderie had occurred; most of the horses were gone already. The second shift of animals coming to use the barns next week, mostly camelids, for the two-day Llama/Alpaca show had not arrived. To the horse owners, it was just the thought that their prize-winning and high-strung horses might be harmed or upset by staying together with goats and Lord help us, turkeys who had also been disenfranchised by the flooding. One enterprising goat did manage to eat half the tail hair off one horse in training, which caused quite the freak out among the owners. They still brought it up at every farm council meeting. Since they had decided to build another barn to prevent any such shenanigans from ever recurring, it had quieted down. They’d been raising funds for over four years for the barn and it might get done this year. They had chosen a spot for it. They had gotten permits. The fair board at least had gotten to the point of requesting bids from the local contractors for its construction. They had half the money in hand and half promised. It might just happen. In the meantime, each small town in the tri-town region had its own festivals each year. Generally, it was near festival time that events got interesting for the local police.

Lyonsville, the smallest and farthest away from the city, had its yearly Founder’s Day celebration. Most of the sales at the local shops occurred either during Founder’s Day or Christmas and buses of tourists came in to see the quaintness of the little village; take surreptitious pictures of Amish strolling the streets eating cotton candy and feel the small-town warmth. The quilt auction held each year was a highlight of the celebration. Their signature anchor stores, the Fiber Avalanche and Fiber Mavens, Thom’s Hobbies, and the Not Your Normal Antique Store filled up one entire block of things to do and see. Lyonsville had had some really bad times in the past three years (see the Fiber Mavens Series) which resulted in a better understanding of how much harm tightly kept grudges can cause in a small community. Since then, life had settled back to quiet of a sort; their local festival had some small issues. For instance, the Mason sisters still made their homemade hootch and took out tent space to sell it. Last year, they’d been shut down quickly. This year, they were selling the bottles, not the alcohol in the bottles. The bottles were very nicely ornamental ones they got from a specialty catalog online. The decanters were one liter each and shaped like honey bears (for the mead) maple leaves (craft beer), dogwood blossoms on a branch (elderberry wine), a rearing horse (corn whisky), a not quite dressed Greek lady (berry sherry). They’d set up lights so the bottles shimmered with color and style. No one official really caught on until the last couple of days and by that time, the enterprising ladies had sold their full crop anyway, so when the feds got there, Susie Mason had allowed the overflow floral arrangements from the 4-H flower judging to use their tent and there was no evidence. Most of the rednecks in the county had gotten their stash for the year in the first week of the festival so everyone was happy. And to be fair, once emptied and refilled with colored water or marbles, the bottles did look pretty setting in the windows in the kitchen, so the wives didn’t mind them as much. The ingenuity of the Mason sisters was looked forward to by moonshine lovers all over the three towns. It also led to a sharing of resources among law enforcement in the three towns, and a more diligent stance on prevention. Brad Malcolm and his dog Rutherford Ruckus had settled in as a detective team under Erick Black, the sheriff. Brad was married to Casey, a social worker/ therapist who worked with local agencies to keep families together.

Fern Valley was a little larger town, a bit to the east of Lyonsville and ten miles on the main road or fifteen on back roads if you wanted to see the countryside, closer to the state capitol but not a bedroom community. Their annual get-together was an incredible Gardening Festival with every home on display, a town color scheme, and lots of local people and organizations making up talent shows and bake sales. Local charities made sure there were plenty of trophies and ribbons and nearly anyone of any note locally ends up judging some affair or other. The detectives and law officers who helped keep the town safe had diligent canine buddies who seemed better sometimes at solving the crimes than their masters, and occasionally it seemed they ran neck and neck in finding the people who wanted to cause havoc in Fern Valley. (See Fern Valley Fur Family series) Dick Jamison was the sheriff and has a dog named Clem. BW and his sidekick Ascot ran the canine group at the Sinclair Animal rescue home.

Friedman was the largest of the three towns and the home of the Pum family, who started as potato farmers. They ended up founding a small but world-class zoo in memory of their daughter who had died of leukemia. Melody’s Zoo was a hit with all the local folks, and people came to walk its happy paths and learn about animals, ride its zoo train through a tunnel, feed the animals at the petting zoo, and in general have a great time. Despite the assaults, murders, and general mayhem last year when they first opened, the zoo had settled into a pleasant regime of just enough security, a place to hold school outings and weddings, field trips, and company picnics. As the bugs were worked out, it became accepted statewide as a family-oriented place to go. The docents were active, the animals more so, and until her pregnancy, Mrs. Pum loved to travel and kept sending home new animals, constantly adding to the facility. With the birth of her newest and they all hoped last child, (Her adult children quietly talked among each other, mom was 48, and didn’t one eventually stop that sort of thing?) Richard Pum, senior, thought the world was becoming a brighter place and he fought to stay humble as he accepted what he thought of as God’s gifts to him. Gary Parker was the sheriff. His wife owns the pet store and with all the general animals in the vicinity of their home, he didn’t think he actually needed a dog, although he and BW, the Fern Valley law director’s dog, occasionally took walks together. He had nothing against dogs, but when the pet store is in your basement, and there are gerbils, turtles, hedgehogs, multiple varieties of small birds twittering, and occasional kittens, he just didn’t feel the urge for a personal experience with a dog. He could always borrow BW.

When Lyonsville had its spate of really bad trouble three years ago, the local police and sheriffs decided to start sharing resources. They held a zoom meeting each week to bring each other up to date on cases; they held cookouts a couple of times a year and they applied for grants together, updating their equipment, and their training, allowing themselves to feel more competent when the feds had to come in on something. Those state people could intimidate small-town cops pretty badly, but standing together, they generally could hold up and do just about anything they needed. They helped at each other’s festivals, they joined up to cover events and investigations, and they formed a brotherhood of lawmen just as their wives joined up into a sort of ladies’ auxiliary to help each other when one of their men was injured in the line. Altogether, the tri-towns were a safe little oasis in a world that rapidly trying to encroach upon them.

Wouldn’t you love to have a dress or shirt in those colors?

Have a great and lovely Autumn!